The drone has good potential in detecting change, at the tree scale, and could help monitor illegal clearing and land restoration in classified forests and protected areas

A study carried out as part of a PhD thesis and Mé REDD+ project (PRM) by the Nitidæ team, was recently published in the journal Drones. 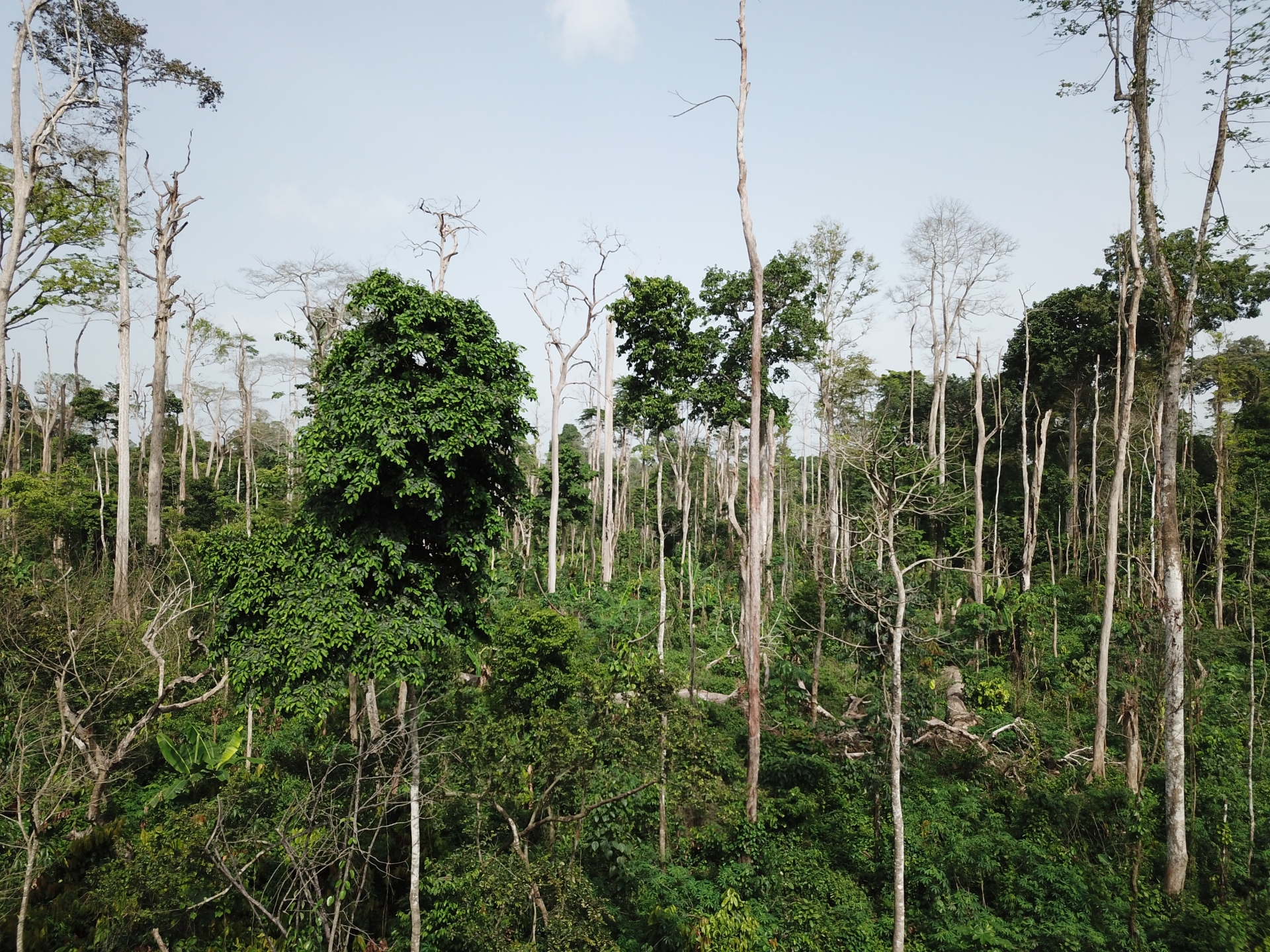 This study is the result of several years of work initiated as part of the Mé REDD+ project (PRM) in 2016. It aimed to assess the dynamics of deforestation and forest degradation, in particular intra-annual tree losses in the classified forest of Bossématié (which today has the status of Nature Reserve) using aerial images acquired by drone. Tree cutting and cocoa farming are strictly prohibited in these forests. However, they are under strong pressure from cocoa farming and poaching (Oszwald et al., 2007). The establishment of new cocoa plots in the natural forest is gradual over several months, with an opening of the canopy by setting fire to selected trees concomitantly with the dissemination of cocoa beans (see photo). For this, it is necessary to test methodologies that combine both geometric precision (tree scale) and speed of measurement over time (like the drone) to track these conversions.

The methodology developed is based on an analysis of tree losses detection in forest environments from a time series of aerial images acquired by drone from November 2018 to April 2019 on a set of sites identified in the forest studied. 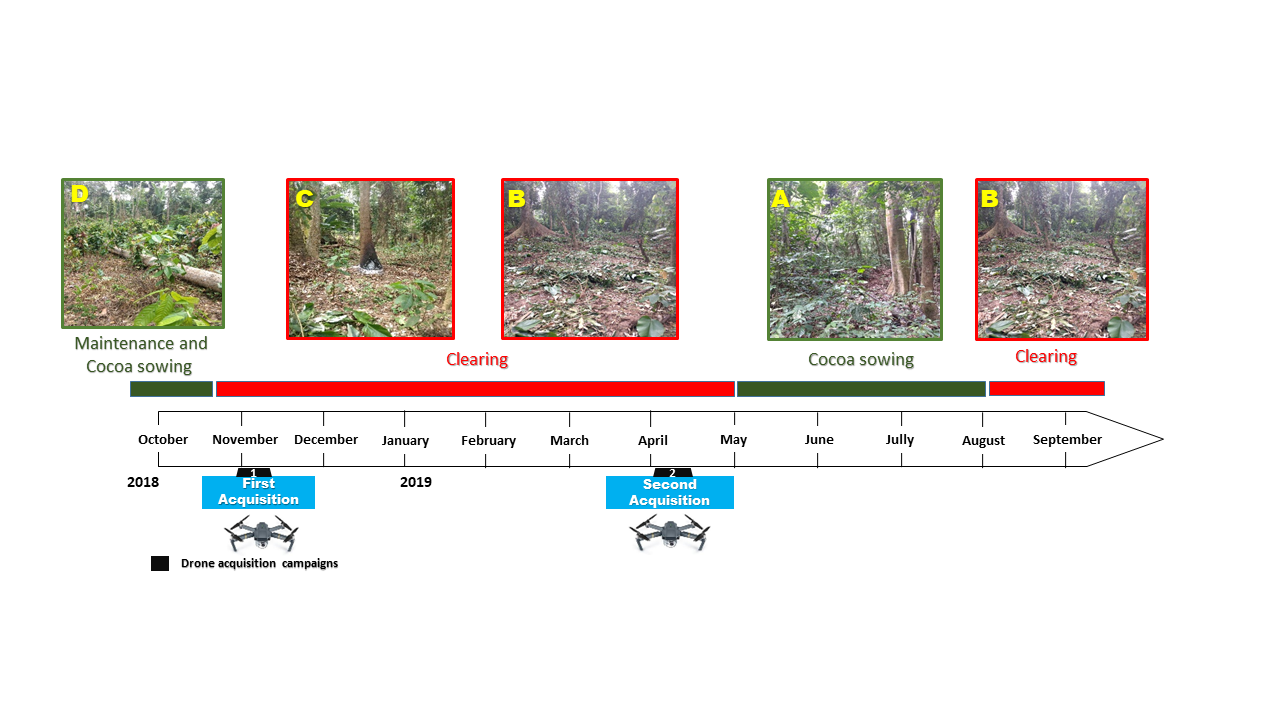 Illustration of the clearing process in the classified forests of Côte de d'Ivoire (example taken from the Bossématié classified forest). A/ Forest which seems intact but which is already sown with cocoa beans; B/ Appearance of cocoa seedlings and felling of the undergrowth; C/ Burning of the base of large trees; D/ Fall or felling of standing dead trees with growth of cocoa trees

The study shows that the maximum height of trees is 65 m for all sites over the period from November 2018 to April 2019 with an average of 35 m. The consistency of tree height over the study period shows the robustness of the approach for monitoring over time and detecting changes. The average area of the tree crown is estimated at 152 ± 11 m2 with a standard deviation of 132 m2. The temporal comparison of tree structural data made it possible to detect 107 tree losses corresponding to a clearing area of 2 ha on all the sites studied (≈ 500 ha) during the period November 2018 to April 2019 (≈ 6 months) with a satisfactory overall accuracy of 97%. 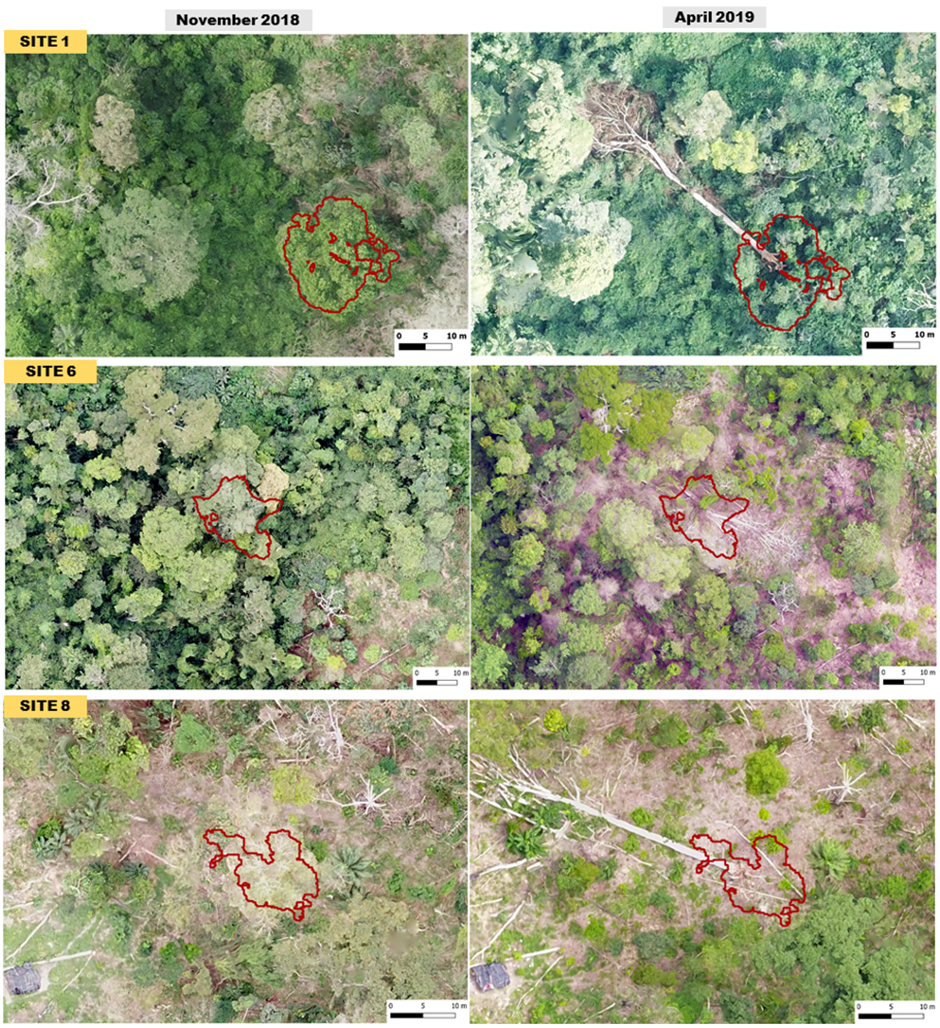 Illustration of the identification of tree losses (the line in red materializes the lost tree: new clearing or loss linked to the burning of the tree) in the classified forest of Bossématié on the orthophotos from November 2018 to April 2019

This is a pioneering and innovative study in Côte d'Ivoire for change detection showing the interest of the drone in a classified forest (Bossématié) subject to strong anthropogenic pressure. Current reflections on technical choices, in the context of spatial land monitoring (SST), could benefit from this study learned lessons. First, the results of this work demonstrate that it is possible to detect deforestation and forest degradation with the drone. Finally, the production of forest structure indicators and the detection of changes provide new knowledge to support actions to preserve and rehabilitate degraded forest areas.

The summary of the study is presented below

The fight against deforestation and forest degradation is now a major challenge for the preservation of forest ecosystems. Forest monitoring methods by remote sensing, currently deployed, are not always adapted to the Ivorian context because of the high cloudiness, the diversity of crops under shade and the clearing methods that are difficult to monitor. This study proposes an approach for detecting tree loss by drone in the classified forest of Bossématié in order to assess the dynamics of deforestation and forest degradation. The method used is based on an analysis of the detection of tree losses in forest environments from a time series of aerial images acquired by drone from November 2018 to April 2019 on eleven (11) sites identified in the forest studied. Based on the photogrammetric models produced, tree heights were estimated. Then, tree losses were detected by the variation in tree heights over the period studied. The analysis of the distribution of tree heights in the classified forest of Bossématié revealed that the maximum height of trees is 65.06 m in November 2018 and 64.07 m in April 2019 with an average height of trees which is 35.29 m in November 2018 and 35.55 m in April 2019. The average area of the tree crown is estimated at 152 m2. These tree structural data made it possible to detect 107 tree losses corresponding to a deforestation area of 2 ha on all the sites studied during the period November 2018 to April 2019 with an overall accuracy of 97%. This forest monitoring approach shows a considerable loss of biodiversity and must be part of the implementation of the strategy for the preservation, rehabilitation and deployment of an operational deforestation monitoring system in Côte d'Ivoire.