Tiodionwa Ouattara admirably defended his Doctoral Thesis in Science and Technology on March 26, 2022 at the Félix Houphouët-Boigny University in Abidjan

Tiodionwa Ouattara received the title of Doctorate in Science and Technology, Mention: Remote Sensing and GIS, Specialty: Planning, Land and Ecosystem Management. His work focuses on "Land and Deforestation Monitoring by Spatial and Aerial Remote Sensing in the East and South-East of Côte d'Ivoire".

The Ivorian State initiated a new forest policy in 2019 which aims to curb deforestation. To support this deforestation reduction policy and better understand the current dynamics, fine and regular mapping of changes in land occupation and use is necessary. However, strong limitations affect these monitoring systems: high cloudiness, spatial resolution, frequency of acquisition as well as complexity of agrosystems, etc. which explains their low operational use in Côte d'Ivoire despite their potential. Moreover, such studies of land cover mapping by satellite must take into account the rapidity of the underlying anthropogenic processes, it is necessary to develop reproducible approaches on the annual or intra-annual time scale according to the process. 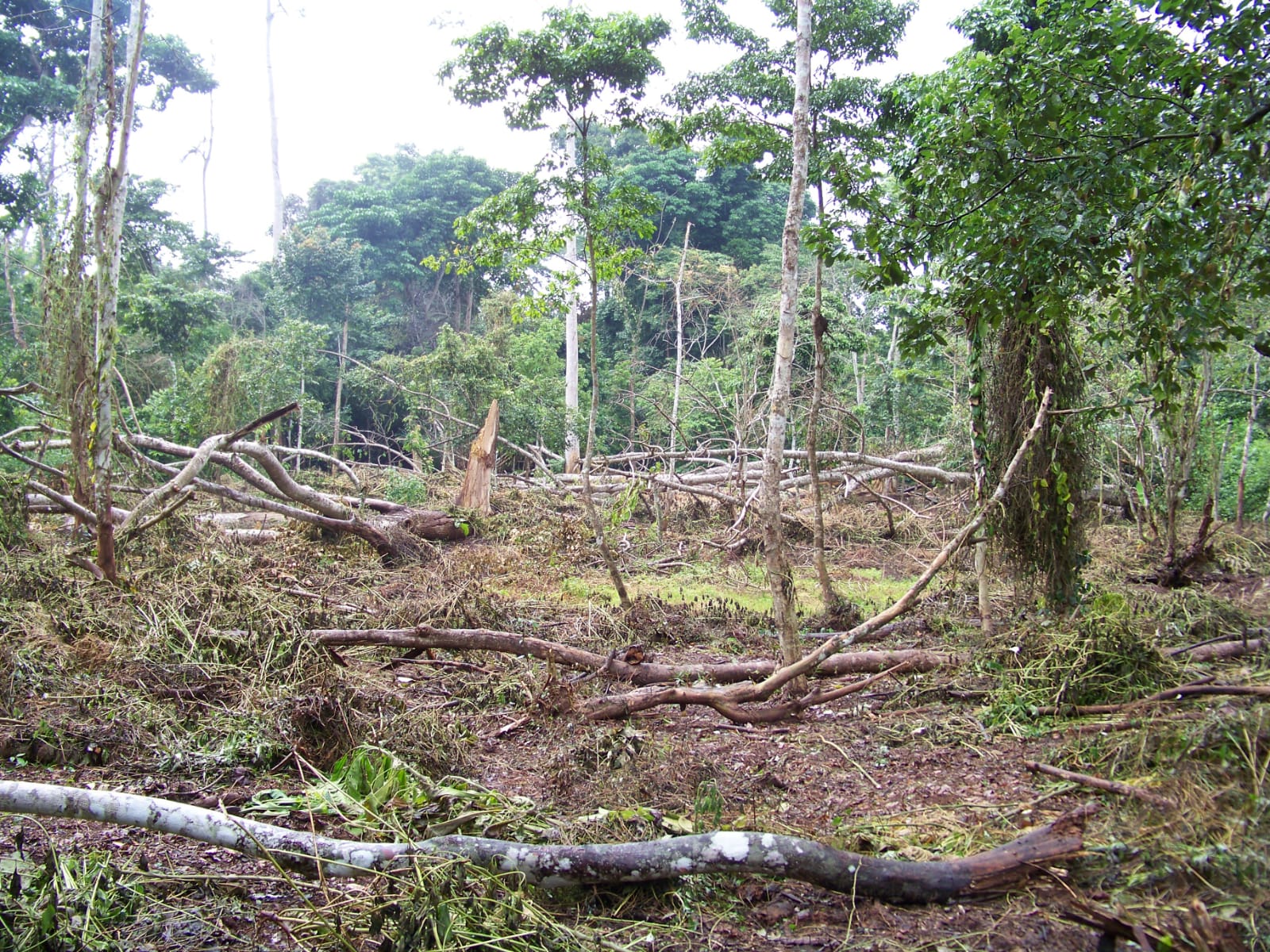 This is the issue addressed in this study, which seeks to test and develop methodologies combining the analysis of data from space and aerial remote sensing (Drone) and field data to assess and better understand changes in use land in Côte d'Ivoire. This work was carried out within the framework of the Mé REDD+ project and focused in particular on the dynamics of deforestation and forest degradation at the regional and local scales. The results show that the extension of cash crops (cocoa-coffee, rubber and oil palm), undifferentiated crops and fallow land as well as infrastructure (housing and roads), led to a deforestation rate of 4.95 % per year in the East and South-East of Côte d'Ivoire between 2016 and 2019.

Dense forest formations are converted first to degraded or secondary forests, then to crops or undifferentiated fallows before cocoa-coffee crops appear. In the case of degraded or secondary forests, it is cocoa-coffee crops that remain the first cause of deforestation, then undifferentiated crops or fallows before the appearance of rubber.

Analyzes at the local level have shown a significant loss of biodiversity in the classified forest of Bossématié and also the importance of the drone in the evaluation of the dynamics of deforestation and forest degradation in forest environments. These results shed new light and quantify post-clearing land uses, in particular the impact of cash crops. They also underline the importance of secondary formations in the landscape (former abandoned cocoa plantations) and their recent conversions to other crops, particularly rubber.

Illustration of Orthomosaics (A), Digital Surface Models in 3D (B), 2D (C) and Digital Terrain Models (D) between 2018 and 2019 on a site in the Bossématié classified forest

This work on a regional scale has made it possible both to quantify the extent of the changes as well as the probable causes of these changes, making it possible to better understand the ongoing changes in the territory. The methodology is easily reproducible in other regions or as part of an update (open source tool and free data).
In addition, ongoing reflections on technical choices, in the context of spatial land monitoring (SST) at the national level, could benefit from the lessons learned from this study. In particular, the results of this work demonstrate that it is possible to detect deforestation and forest degradation with the drone. This would make it possible to significantly refine the Forest Reference Emission Level (NERF) transmitted by Côte d'Ivoire to the United Nations Framework Convention on Climate Change (UNFCCC) as well as the establishment of a monitoring system. early warning to guide actions in the field. 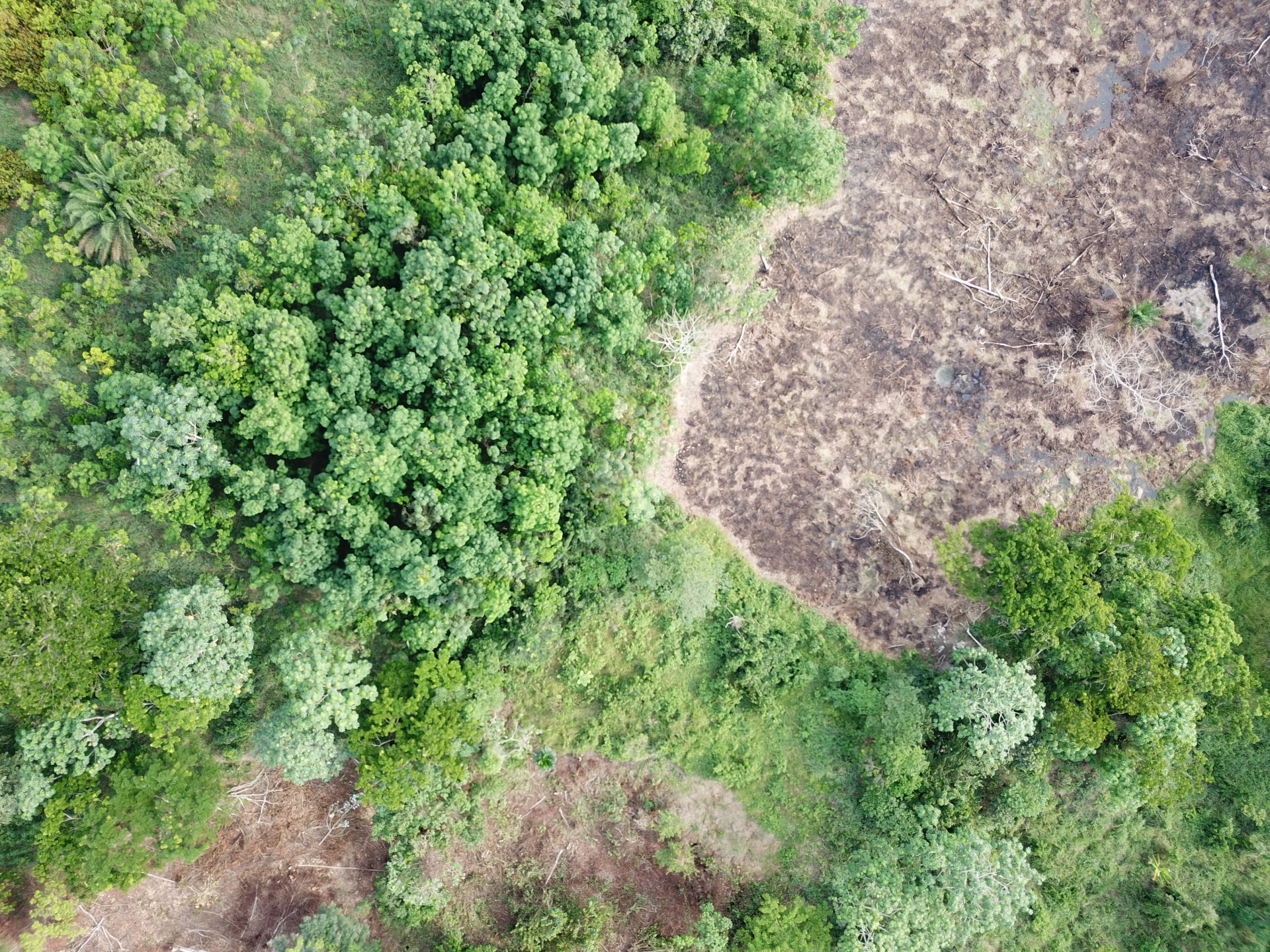 The summary of the Thesis is presented below.

En Côte d'Ivoire, to support policies to reduce deforestation and better understand the dynamics underway, fine and regular mapping of changes in land occupation and use is necessary. However, these studies are rarely conducted over large territories or they are sometimes obsolete because of the rapidity of the underlying anthropogenic processes. The objective of this thesis is to assess changes in land occupation and use, in particular the dynamics of deforestation and forest degradation at the regional and local scales. The methodology is initially based on the use of Sentinel-2 satellite images at 10 and 20 meters of spatial resolution over a study area of 22,014 km2. After pre-processing, these Sentinel-2 images were subjected to an automated analysis in R in several stages, including supervised classification with the Random Forests algorithm and evaluation of the quality of the classification model. This classification was based on a delimitation of learning data describing the study area into fifteen (15) categories of occupation and land use and made it possible to produce maps of occupation and land use. land in 2016 and 2019. Secondly, a time series of aerial images acquired by drone from November 2018 to April 2019 on eleven (11) sites identified in the classified forest of Bossématié made it possible to estimate the heights of trees as well as the size of tree crowns based on photogrammetric models. Tree losses are then detected by the variation in tree heights over the period considered and were evaluated by photo-interpretation. Finally, spectral and backscatter indices were calculated from the 2019 Sentinel-1 and 2 satellite images and were then used with the Random Forests algorithm to produce the 2019 tree loss map over the entire region. classified forest of Bossématié. The maps resulting from the analysis of Sentinel-2 images presenting satisfactory overall precision (92% for the 2016 map and 87% for that of 2019) were cross-referenced to describe the forest transitions of the studied area. The results underline that the extension of cash crops (cocoa-coffee, rubber and oil palm), undifferentiated crops and fallow land as well as infrastructure (housing and roads), led to a deforestation rate of 4.95 % per year over the period studied. The analysis of the distribution of tree heights in the Bossématié classified forest revealed that the maximum height of trees is 65.06 m in November 2018 and 64.07 m in April 2019 with an average height of trees which varies from 34.29 ± 6.27 m to 37.00 ± 7.14 m in November 2018 and from 34.63 ± 6.40 m to 36.88 ± 7.05 m in April 2019. average tree crown was estimated at 152 m2. These tree structural data made it possible to detect a minimum of 107 tree losses corresponding to a clearing area of 2 ha on all the sites studied during the period November 2018 to April 2019 with a satisfactory overall accuracy of 97 %. However, the detection of tree losses using indices calculated on the basis of Sentinel-1 and 2 satellite images presented low levels of precision. This study thus provides a detailed and up-to-date understanding of changes in land occupation and use and contributes to discussions on the establishment of a national land monitoring system.

>> Consult the article published in the journal Drones here