Madagascar is known for its rare and threatened biodiversity and for its high rate of deforestation. Deforestation in the unique dry forest ecosystem in western Madagascar is even higher than in the rest of the country with a loss of more than 2% of the cover each year.

Within the framework of two projects developed in partnership with Nitidae (Mikea et BiosceneMada), two missions took place in 2016 in the Mikea National Park, in the Menabe protected area and in the Kirindy-Mite National Park to understand the particular factors explaining deforestation in this zone. The same findings were noted and were the subject of a publication available as a preprint at the bottom of the page. 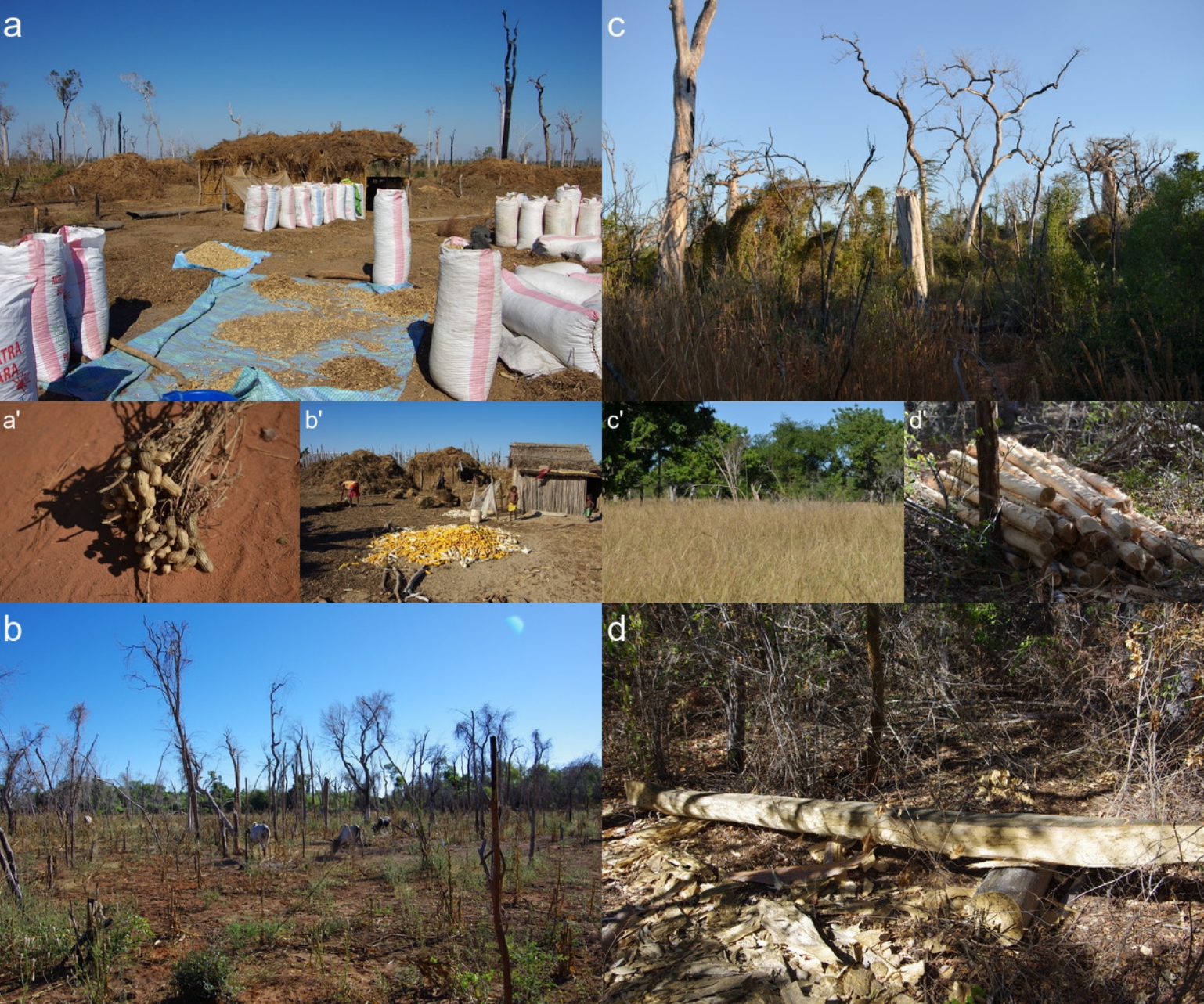 Main causes of deforestation in Western Madagascar. a-a’:Slash-and-burn agriculture (“hatsake”) for peanut crop. Peanut (a’) is cultivated as a cash crop. Most of the production is at the destination of the domestic market. b-b’: Slash-and-burn agriculture for maize crop. Maize (b’) is cultivated for auto-consumption and as a cash crop. The production of maize is at the destination of the domestic market and is used in particular for livestock feeding. c-c’: Cyclone followed by uncontrolled fires. Cyclone “Fanele”(2009) caused tree mortality and accumulation of wood fuel on the ground. As a consequence, uncontrolled fires set on nearby pastures (c’) spread over large areas of forest after 2009. d-d’: Illegal logging. Timbers are used for house and dugout canoe constructions

As it is often the case, main cause is slash-and-burn agriculture. However, it is practiced here to supply the national market with maize (mainly for livestock) and the Asian market with peanut. The second cause is uncontrolled bushfires, set to gain land from the forest for livestock or agriculture and accentuated by forest degradation due to illegal logging of precious woods (under the cover of certain authorities) or the damage caused by frequent cyclones in the area (damages accentuated themselves by forest degradation).

The deforestation fronts through agriculture and fires, as well as the various intermediaries intervening along the supply chains would be managed by a certain local elite, sometimes revealing conflicts of interest. Moreover, protected area managers do not have the legislative or financial means to intervene effectively. To curb the rate of deforestation, governance and regulation of the national market seem to be two important levers. 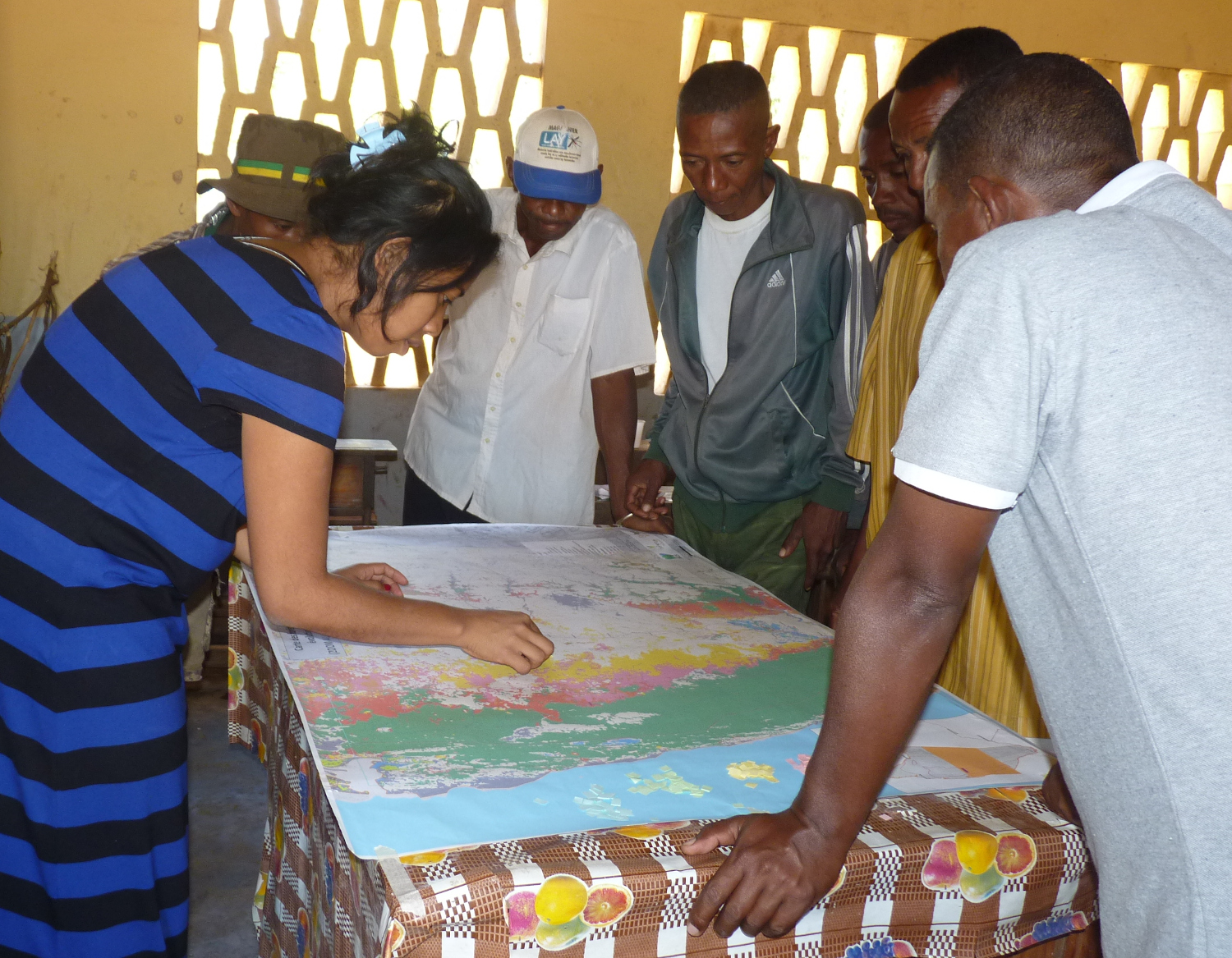 This study is based on surveys conducted in 2016 among local farmers, fokontany (township) representative and environmental stakeholders in the three study areas. The objectives of the surveys were firstly to identify the causes of the deforestation and secondly to assess the efficiency of the conservation actions implemented by the organisations in charge of the management of the protected areas. Information from field surveys was cross-checked and complemented by a review of technical reports on the maize and peanut sectors in Madagascar and scientific studies on the deforestation process in south-east Madagascar. The authors also used the FAOSTAT to obtain information on the national production of maize and peanut and the UN Comtrade website to obtain information on the exportations.

Madagascar is recognized both for its unparalleled biodiversity and the high level of threat suffered by this biodiversity, associated in particular with anthropogenic deforestation. Despite sustained efforts to fight poverty and curb deforestation, forest cover in Madagascar is rapidly decreasing. To try to explain why it is so difficult to stop deforestation in Madagascar, we analysed the recent deforestation process in Western Madagascar through satellite image analysis and field surveys. We show that deforestation has increased from less than 0.9%/yr on 2000–2010 to more than 2%/yr on 2010–2017. We identified two major causes of deforestation, which were not associated with subsistence agriculture: slash-and-burn agriculture for the cultivation of cash crops (maize and peanut), and uncontrolled fires to create open pasture. Maize production is mainly at the destination of the domestic market and is used in particular for livestock feeding. Peanut production has boomed since 2013 and more than half of it is now exported towards asiatic countries. The money earned by farmers is principally invested into zebu herd acquisition. Trade of agricultural commodities benefits several intermediaries, some of whom have political responsibilities thus creating conflicts of interest. On the other hand, agents from institutions in charge of the management of the protected areas have no means to enforce laws against deforestation. In the absence of an efficient strategy to stop deforestation, we predicted that 38-93% of the forest present in 2000 will have disappeared in 2050. Forest loss, apart from biodiversity loss and climate-change global issues, will be at the expense of local population. In order to stop deforestation, international aid should be used to improve local governance to enforce environmental laws and pressure should be put on trading companies to buy certified agricultural commodities that are not derived from deforestation